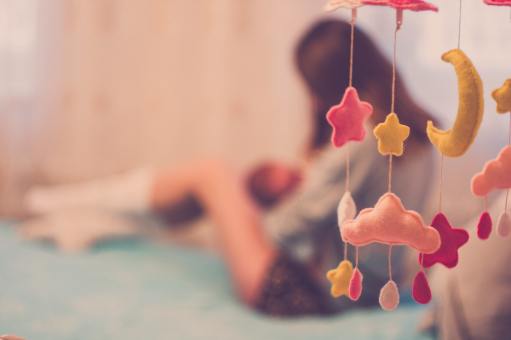 All the moms out there, don’t feel guilty when you feel like it’s time to put an end to breastfeeding. You know yourself and your baby better than anyone else. So, once you’ve made the decision to stop nursing, stick to it, and don’t give in when the baby is fussy and cranky.

My baby is 13 months, and he usually breastfeeds for comfort at night. He will also not go to sleep without nursing, which makes it difficult for other family members to put him to sleep whenever I’m away. And he would continue waking up at least 3-4 times a night and will not soothe without nursing.

So one evening, when he was exhausted but wouldn’t stop crying because he needed the boobies to go to sleep, I simply refused to give it to him. Although it would’ve been easier to just nurse him and put him to sleep instead of hearing him scream and cry, I just couldn’t give in because I had to start somewhere. It took a lot of patience, and then after some time, he stopped crying and got distracted by his sister, who started playing with him. I count that as my first success.

I didn’t put him down for a nap because I wanted him to sleep without nursing, so finally, when it was bedtime, I made him a bottle of Enfamil toddler milk. He cried and tried to push the milk bottle away, but I still did not give in. I started singing his favorite lullaby while swinging him to calm him down. I continued trying to give the bottle, and after a few tries, he gave up fighting because he was too exhausted. He fell asleep, drinking the bottle. Wooohoooo! Another success.

I put the milk powder in a portable baby container and set aside spring water so I can have the milk ready if he wakes up. He did wake up in the middle of the night but wasn’t as cranky as all other nights. I did nurse him because I was engorged. And then, when he woke up the second time, I made him a bottle, and he seemed to be okay and fell asleep right away. When he woke up, he was a happy baby.

This helped a lot because when I went to work, someone could easily babysit him without having any problems putting him down for a nap. Even though after the first day, he would cry here and there, but it was much more manageable after day one, also though he continued nursing in the middle of the night. It became easier to bottle feed and then put him to sleep while he was full. The darkroom also did the trick, so setting up the “bedtime mood” is also important.

He loves eating his solids throughout the day and enjoys his milk before nap and bedtime. So all the mommy’s out there, just remember, do not feel guilty even when they cry and wail. I know it breaks your heart, but trust me, they’ll get over it, and you’ll find your peace at night. You just have to have the patience for at least 3-4 days, and then it will all become a routine. Not all children are the same, so it may take longer, or it may not take any effort at all for some. I did it with both my children, and it took about 3-4 days to get them not to be too dependent on the breastmilk all the time.

But, if your baby completely rejects the baby powder milk, you can always try pumping and giving it in the bottle. I would recommend getting a milk bottle that is very similar to the texture of a nipple. I have put up a link to my favorite bottles for babies down below as well as the portable formula dispenser.

Leave your comment below about your experience on how you stopped nursing your little one. I would love to hear from you!

I am a mommy of two little cuties and a nursing student. Follow me through my journey on how I manage school with my kids. Come follow me on this journey to success!! View more posts